Kentigern (Welsh: Cyndeyrn Garthwys; Latin: Kentigernus), known as Mungo, was an apostle of the British Kingdom of Strathclyde in the late 6th century, and the founder and patron saint of the city of Glasgow.

An ancient church in Bromfield is named after him, as are Crosthwaite Parish Church and some other churches in the northern part of Cumberland.

The Life of Saint Mungo was written by the monastic hagiographer Jocelyn of Furness in about 1185. Jocelin states that he rewrote the ‘life’ from an earlier Glasgow legend and an Old Irish document. There are certainly two other medieval lives: the earlier partial life in the Cottonian manuscript now in the British Library, and the later Life, based on Jocelyn, by John of Tynemouth.

Mungo’s mother Teneu was a princess, the daughter of King Lleuddun (Latin: Leudonus) who ruled a territory around what is now Lothian in Scotland, perhaps the kingdom of Gododdin in the Old North. She became pregnant after being raped by Owain mab Urien according to the British Library manuscript. Her furious father had her thrown from the heights of Traprain Law. Surviving, she was then abandoned in a coracle in which she drifted across the River Forth to Culross in Fife. There Mungo was born.

Mungo was brought up by St Serf who was ministering to the Picts in that area. It was Serf who gave him his popular pet-name. At the age of twenty-five, Mungo began his missionary labors on the Clyde, on the site of modern Glasgow. He built his church across the water from an extinct volcano, next to the Molendinar Burn, where the present medieval cathedral now stands. For some thirteen years, he labored in the district, living a most austere life in a small cell and making many converts by his holy example and his preaching.

A strong anti-Christian movement in Strathclyde, headed by King Morken, compelled Mungo to leave the district, and he retired to Wales, staying for a time with St David, and afterward moving on to Gwynedd where he founded a cathedral at Llanelwy (St Asaph in English). While there, he undertook a pilgrimage to Rome. However, the new King of Strathclyde, Riderch Hael, invited Mungo to return to his kingdom. He decided to go and appointed St Asaph/Asaff as Bishop of Llanelwy in his place.

For some years, Mungo fixed his Episcopal seat at Hoddom in Dumfriesshire, evangelizing the district of Galloway. He eventually returned to Glasgow where a large community grew up around him. It was nearby, in Kilmacolm, that he was visited by St Columba, who was at that time laboring in Strathtay. The two saints embraced, held long converse, and exchanged their pastoral staves. In old age, Mungo became very feeble, and his chin had to be set in place with a bandage. He is said to have died in his bath, on Sunday 13 January.

In the Life of Saint Mungo, he performed four miracles in Glasgow. The following verse is used to remember Mungo’s four miracles:

The verses refer to the following: 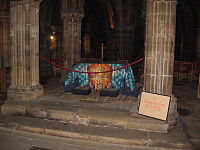 Tomb of St. Mungo in the crypt of Glasgow Cathedral

On the spot where Mungo was buried now stands the cathedral dedicated in his honor. His shrine was a great center of Christian pilgrimage until the Scottish Reformation. His remains are said to still rest in the crypt. A spring called “St. Mungo’s Well” fell eastwards from the apse.

Journey into the Mind Maze

an anamcara exploring those close encounters of the liminal kind